This is a topic which seems massively debatable. There are camps for and against formal education for designers, each one with pretty valid observations to back up their viewpoints. Some say that a formal education gives a designer a more broad-based view about how they approach their work. In a classroom setting, since their work is evaluated and commented on, the advantage of having formal setting here is that designers can identify their weaknesses and learn from them. However, to get educated means a huge pile of student loans to pay off at the end of it all, a factor that puts off a huge chunk of designers, who then take the self-training route instead. 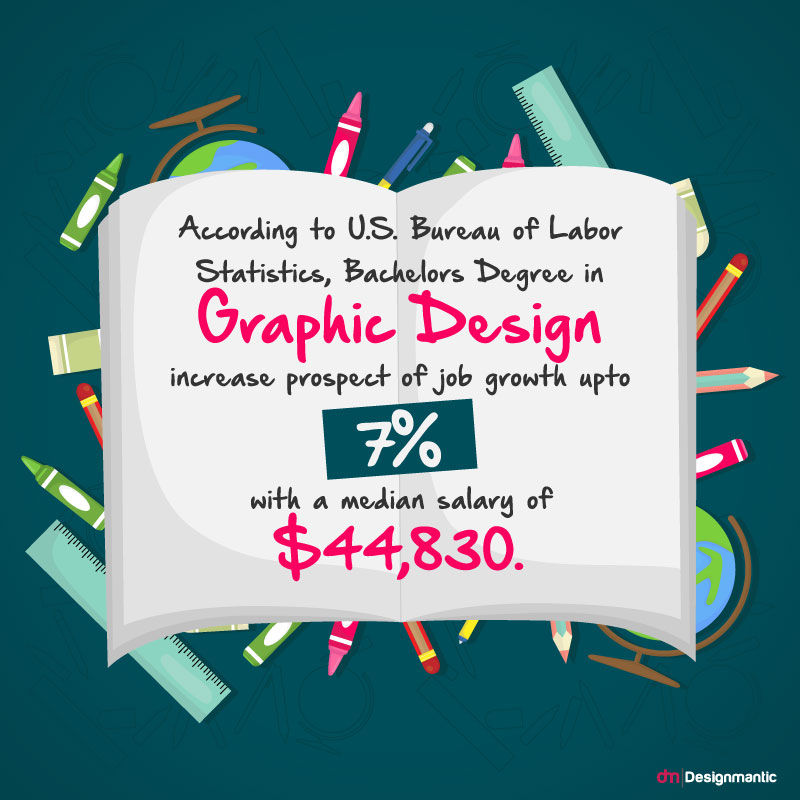 And then there is the matter of the qualified vs. the non-qualified designer joining the workforce. If a designer with education qualifications ends up getting a better offer at a non-designing job, they’d be more inclined to take it. Designers with no formal education may end up with low-paying junior designer positions despite their creative flair or lack thereof. As we mentioned, there’s too much debate surrounding this.

Related: 9 Things Graphic Designers Can Do To Make Extra Money!

Denise Luckey from Lotts of Design makes the case for formal education first, listing the pros of getting into it:

I would also argue for school because without it you are missing out on learning basic principles of design that all designers should share – including graphic designers, fashion designers, interior designers, architects, industrial designers, furniture designers and on and on… without those common core classes, it’s like flinging yourself into a house that doesn’t have a strong foundation. I’m talking about classes like Art History (years of it), drafting, photography, life drawing, 2D design, 3D design, color theory, rendering, architectural rendering, technical perspective.

Stewart Vernon, coming from a non-graphics background, counters the argument above argument that places a formal education as being the pinnacle for success:

Outside of things that require big budgets for actual practice… most everything else can be learned outside of school. The originator of most things happened outside school if you go back far enough… and ALL new innovations come outside of school, when people discover/invent things out in the field.

I always argue against any automatic assumptions that:

1. Someone with a degree or certification knows what they are doing, and knows more than someone without those papers.

2. Someone without a degree or certification can’t possibly be qualified OR at least as qualified as someone who has those papers.

Virtually anything taught in school can be learned on one’s own… or via apprenticeship on-the-job without "formal" education. Things like standards and basic practices and nomenclature are all things not unique to academia.

Or perhaps we are looking at the issue all wrong. Maybe instead of the argument being about for-or-against formal education, we should let a screening test separate a designer from their proficiency and creativity? Raffy Cases, an independent designer from Philippines seems to think so, and here’s why:

By then, what’s the point of a profession? Isn’t it done so that you fulfill a duty of service in a community or a country, or you enjoy doing what other people don’t?

As you might have surmised from the length and breadth of responses, this topic shows no signs of dying down. Education is important, even in today’s globalized world. A designer can still teach themselves without any prior enrollment in a course for the same, depending on their designing acumen and contacts to get a big break in the design industry.

One thought on “Is Formal Education Necessary For Designers?”