A bold rebranding foray is the next chapter in Yahoo’s strange journey from being the pioneer of early internet era to an aged subsidiary of Verizon. After a report from Business Insider announced the clandestine news of a potential Yahoo name change, Tim Armstrong, the AOL CEO, shortly tweeted after to confirm the rumor. It’s now official! After the mammoth telecom company acquires control of Yahoo’s core web assets, AOL and Yahoo will be merged to build a new entity, OATH!

The newly formed entity- combined with Verizon’s user data across mobile, internet, and cable- is projected to give Facebook and Google a run for their ad tech dollars. Verizon has its hopes perched on the combination of AOL and Yahoo to help it pitch more digital ads, even though the two internet forerunners had been hanging by a bare thread themselves on their own.

The entire sale process of Yahoo had been an exasperatingly beleaguered one; Yahoo had been dragging its feet, hoping to escalate its revenue for years, before finally announcing last year that it was up for sale. In the mid of 2016, Verizon put up a price of $4.83 billion , but after Yahoo unveiled a series of mass security breaches on the network, affecting more than a billion customers, the deal was finally sealed on a reduced sales price of $4.48 billion.

The mammoth security breakdown was one of the biggest cases of internet breaches in the history of internet, raising eyebrows and eliciting insinuations that customers might wean off Yahoo in favor of competitors, narrowing down the opportunities to show ads.

After witnessing the rise and fall of the Digital Pioneer, Yahoo!, the news of it relinquishing its authority came as a shock. As for what will become of Yahoo, the company is selling its major internet business that you have known and loved forever, and will be left with only its 14% stake in Chinese retail giant Alibaba. In order to reflect its new business, the Yahoo shell will rebrand as Altbaba. While Yahoo neither confirmed nor declined to observe on the creation of “Oath,” an AOL spokeswoman offered this prognosis:

“In the summer of 2017, you can bet we will be launching one of the most disruptive brand companies in digital.”

Our panelists for today discuss how incorporating Yahoo into its encompassing circle is going to fare for Oath:

Oath isn’t a pleasant word and makes us reminisce with shudder the unfortunate case of Tronc (Tribune Online Content). It sounds like a weird, cultish organization armed with a clandestine mission. In Oath, there’s indubitably a weird hat and a secret handshake. In fact, Armstrong encourages people over the globe to #TaketheOath in his Tweet. For all we may conjecture, the name may be an Anagram. Especially since it involves Yahoo and AOL, it could easily spell out “Our Access to Hell.”

Most contemporary high-tech naming conventions are borne of the notion of mental association. This thinking took off with the launch of the Pentium chip. The word Pentium didn’t exist, and was designed with a purpose of eliciting a subconscious response. When Intel introduced its chip in 1993, it should have been called the 80586, but the company splurged a fortune and hired top-notch consultants to create a new Brand. Pentium was a clear winner. There are at least two elements of mental association in Pentium. “Pent”, short for Penta or 5, was for 586, and implied Pentagram and pentagon. Secondly, “ium” when combined with the P of Pentium hinted at Platinum. AMD followed with Athlon, perhaps incorporating longevity and athletics.

According To John C. Dvorak, A columnist at PCMag.com,

“The concept of Oath likely started in a board meeting with the idea to call the new combined company “Both.” B-O-T-H – the word itself. It implies two combined companies. It’s dynamite. Fabulous idea. A hard of hearing person heard “Oath”, and people loved it even more. Meeting Adjourned. This scenario makes as much sense and any rationale for calling any company Oath.”

It’s becoming ever confounding what “taking the oath” entails, and what Verizon was thinking when it opted for the name of this highly anticipated merger. Being terribly uninviting and deadly serious, the name is a far cry from fun. Which is why, it has become the latest brunt of online jokes and memes.

Yes, you read that right, if all goes according to plan, your grandparents may soon be logging into #Oath Mail

Oath no you didn't.

The new brand for Yahoo/AOL would have been a great April Fools joke.

overtly ominous is a new, more honest direction in tech company names. I like it. https://t.co/2fAXfNYdfJ

"Oath" sounds like the name of a movie that stars Nicole Kidman as a troubled Puritan widow in 1600s Massachusetts. https://t.co/762HPQVdm3

Tribune Publishing: "We will now be known as Tronc."

Oath: internet company or cologne? Oath, for men who keep their promises…

I thought about it some more. You should only be able to make fun of a company's name if you use the company's product. So, godspeed, Oath.

a Yahoo columnist is now an Oath taker

How Will The Two Disparate Entities Ever Blend?

Remember the frustration of untangling Christmas Lights? This is what’s in store for Verizon. The Lumascape of Oath will be replete with the ghosts of ad tech past. It is a vicious cycle; before the Verizon deal is sealed, Yahoo and AOL are scrambling to integrate their own acquisitions, when a plethora of their acquired companies have yet to create a full stack with their respective ventures. For instance, if you consider mobile media, AOL purchased Millennial Media which acquired mobile exchange Jumptap and Nexage, while Yahoo bought Flurry, which in turn merged with Pinch Media. Similarly for video, Yahoo bought BrightRoll and AOL acquired Adapt.tv. 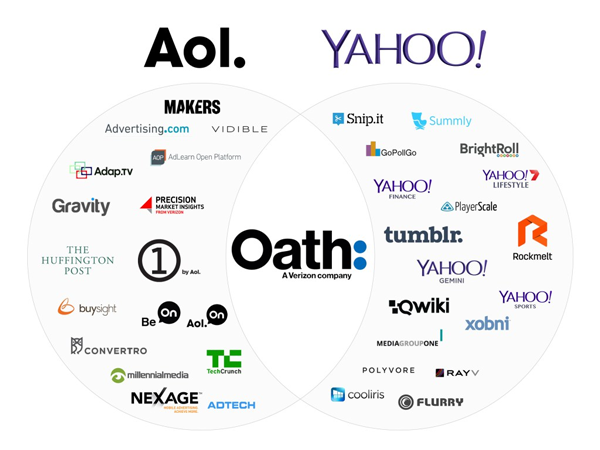 There is a clear lack of best-in-class solution at both companies, so this leaves little choice for Verizon but to combine AOL and Yahoo and build a complete stack out of that. While AOL was already struggling to put together discrete pieces that it had acquired, it is bringing Yahoo in to the circle, which is significantly larger in size than its other acquisitions. Flurry, Nexage, Millennial Media, Adapt.tv, and BrightRoll all remain like discrete products. The integration would come down to an industrious engineering task. The next several years are going to see a lot of integration exercises. Integrating the code is one thing but bringing together disparate cultures, managements, and people is another.

According to Yuyu Chen, Brands Reporter at Digipay,

“AOL and Yahoo have been building their respective programmatic offerings over time through mergers and acquisitions, and, of course, there is a lot of overlap. From our experience, they are all so-so — it is like two mediocre forces combining. Neither AOL nor Yahoo has been stellar in header integrations. For the combined entity Oath, it cannot have competing leadership, product and sales teams. At the core, AOL and Yahoo need to figure out the default platform across mobile, video, display and ad serving, and migrate that platform. Mobile and video will likely be among their first points of integration, as that’s where the market is headed.”

The Aftermath Of “Rushed” Branding

The much maligned four-letter name “Oath” was intended to act as a unified banner under which the various brands of Verizon can be pitched to other businesses, while upholding the individual value of its myriad content brands. The newly minted poster child of the impending face of Verizon’s Yahoo acquisition was built as a B2B brand in-house, designed for partner and customer relationships. Meanwhile, Yahoo branding is expected to exist amongst the Oath/AOL/Verizon stew.

However, a Business Insider story leaked information, beating the companies to the punch, leaving them clamoring to come up with an explanation of the new branding. In the spur of the moment, Armstrong quickly posted a tweet, subduing rising doubt surrounding the veracity of the branding effort. While not in very good taste, “Billion+ Consumers, 20+ Brands, Unstoppable Team. #TakeTheOath. Summer 2017,” was what he came up with!

According to Brian Heater, Hardware Editor at TechCrunch,

The “Oath” logo attached in the Tweet was simple Helvetica, adorned with a singular blue colon that seemed to be a compromise between the Yahoo exclamation mark and AOL Period, and as the company might hope- an open-ended sneak-peak into the impending future.

“The branding push that followed the acknowledgement of the leak was out of necessity, even though Armstrong asserts that the company had a back-up plan in place a month before it had planned to officially reveal the information to the public, in case of a leak . Nevertheless, he does admit to the fact that certain aspects were hurried. The borderline cultish and uncomfortably forceful #TakeTheOath hashtag is just one example of an eye sore. However, the publicity surrounding the announcement, was ultimately a net positive for a brand looking to reestablish itself around an upcoming merger and a number of negative news items surrounding mounting security concerns over the course of the last several months.”

The Fate Of Oath

While internet security breaches are a widespread reality, revelations of multiple hacking attempts on Yahoo could have soured the merger deal in the eyes of many. But, Verizon is still cocksure of the consumer confidence around the Yahoo brand and its myriad subsidiaries. Despite dropping its asking price for Yahoo, Verizon refrained from reconsidering its purchasing plans in the wake of multiple security breaches, dubbing them “an everyday reality of life.”

“First, we’ll be putting in bigger security investments in both companies. We’ve already started doing that at AOL, and we’ll be doing that at Yahoo. The second is we’re going to be very careful about the systems integrations. I think we’ll probably be taking more time on system integration. And the third thing is, I think being really careful about the user trust levels overall.”

The executives at AOL believe that a combined AOL/Yahoo content ecosystem has the potential to become the much needed force to battle mounting concerns surrounding “fake news” as “part of a trusted ecosystem.” While the Yahoo-AOL merger doesn’t appear to be too optimistic when it comes to tech integration, scale seems to be the major value-add in this Verizon deal. Verizon wants to expand its content business since the telecom conglomerate wants to compete with Amazon, Google, and Facebook, and the acquisition of AOL and Yahoo will make it more relevant to advertisers.

In an Interview with CNBC, Armstrong reveled that Verizon’s strength would lie in building a suit of brands, where it can leverage AOL’s programmatic platform One by AOL, Yahoo’s user-behavior data, and place ads on sites like Yahoo Sports.

B2B or otherwise, the value of Oath as a brand will be the subject of much debate and tittle-tattle in the weeks to come, as Verizon has promised to provide more insight into how it is planning to slot Yahoo in with the company’s overall strategy. In the meantime, it is apt to tinker with rhyme schemes, hashtags, and such before its more controlled public unveiling.

‘Oath’ Rhymes with ‘Growth’, but does the merger seem promising to you? Do let us know in the comments below. 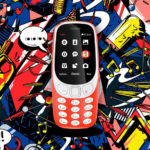 #CreativeBranding: Nokia 3310 Comes Back Like A Boss – The Return of the Titan!